Currently in CYP the main opportunity to create Australian Carbon Credit Units is by applying the savanna burning method, which reduces nitrous oxide and methane emissions through strategic early dry season fire management. Other CFI methods now available are not applicable or suitable for CYP. The main reason for this is the perceived intactness of CYP because most land-based methods assume a degraded or agricultural landscape.

Future carbon opportunities for CYP landholders under the CFI include the development of a rangeland management method that combines fire, cattle and soil management.

A more holistic approach to land management in CYP may be to develop a valuation of the ecosystem services provided by CYP, within which carbon abatement is embedded. This approach would, for instance, better value adaptation measures such as mangrove establishment as sea levels rise under climate change scenarios.

To receive carbon credits through the CFI a project must follow an approved method. In May 2015 the CFI had fifteen methods for industry including for the coal sector, energy efficiency, landfill and waste, and transport.

For the land sector there are, as of May 2015: six methods for agricultural activities, which involve pigs (methane from piggeries), cattle (feeding nitrates), diary and cotton; eleven methods for vegetation and soil sequestration; and two savanna burning methods.

The Australian government is in the process of streamlining the multiple overlapping methods. Changes to nine methods and cancellation of 17 methods where project activities are covered by another method are anticipated. This streamlining process should be completed by July 2015.

The Carbon Farming Initiative is integrated into the Emissions Reduction Fund (ERF). The principle client for carbon credits in Australia is the Australian government. The objective of the ERF is to obtain large quantities of lowest-cost abatement to meet Australia’s international 2020 emission reduction commitment of 5% below 2000 levels. The ERF will work through a competitive auction process for five years to 2020.

A summary of the first auction shows that:

The government issued 107 contracts comprised of 43 contractors and 144 projects.

Two projects from CYP were successful. They were Pompuraaw and Olkola savanna burning projects.

The Savanna Burning Method sets out the requirements for reducing greenhouse gas emissions through fire management aimed at reducing the incidence and extent of larger, higher intensity late dry season fires - defined as those beginning after 1st of August. As of April 2015, 24 properties on the Cape York Peninsula were Registered Projects.

The method is based on comparing the emissions from a savanna burning management project against a pre-project baseline. The baseline must incorporate fire histories going back at least 10 to 15 years.

To see if you are eligible you must first determine if your property lies within the areas covered by the method - essentially much of the central and western region of the Cape York Peninsula, but not the eastern fall. This is because the method relies on North Australia Fire Information (NAFI), which has poor fire mapping for the eastern fall due to persistent cloud cover.

Under the Savanna Burning Method, each project has to carry out detailed mapping of vegetation fuel types, which requires at least 250 vegetation validation points for a project less than 10,000 square kilometres, and 500 or more points for those over 20,000 square km. They must then produce detailed maps of the vegetation of the whole project area, and then upload the maps and project boundaries to the NAFI site. Project proponents then need to complete geospatial and other calculations by using the Savanna Burning Abatement Tool (SavBAT2). A User Manual is available from the SavBAT2 website, and provides guidance on mapping of projects and vegetation for use in the SavBAT2 models.

It is important to recognise that the Savanna Burning Method may conflict with best practice fire management recommendations such as those developed by Queensland Department of National Parks, Recreation, Sport Racing and by Reef Catchments. These best practice guidelines (see Fire tab) provide recommendations for fire frequencies and seasons. These recommendations suggest that some landscapes should never be burnt, such as rainforests and sand dunes, while others should be burnt only every few years, and some such as heaths over much longer periods.

The Savanna Burning Method may conflict with these best practice recommendations in some cases, and especially within the Biodiversity Corridors (See Fire tab). Within these corridors there may be other requirements to protect biodiversity in conjunction with the fire management guidelines.

The Emission Reduction Fund focuses on high quantities of low cost emissions, and the short time frame to meet the 2020 deadline. This has important implications for some land sector projects.

The reforestation method suitable for Cape York requires a long time frame due to the establishment and transaction costs. Establishment costs alone are estimated to be between $8,000-$30,000 per hectare. The amount of carbon sequestered by young forests of less than five years old is also very low. It will take a long term policy framework and high carbon prices to profit from this method.

No project using this method was included in the first ERF auction. The Permanent Environmental Plantings method requires that the land on which the plantings are to occur has not been forested for five years before the project commencement. Any regrowth must not have been cleared. The land can have been used for grazing, pasture management, cropping or nature conservation for five years before planting. If the land has not been used for five years regrowth must not have occurred. These circumstances are rare on CYP.

Notwithstanding the impediments, anyone planning a reforestation project could follow a method in order to take advantage of any opportunities that may be available in the future.

There is little or no opportunity to create carbon credits from avoiding deforestation on Cape York using the CFI. The CFI avoided deforestation method requires the proponent to hold a clearing consent issued before 1 July 2010 for clearing for the purpose of converting to cropland or grassland.

The CFI method for sequestering carbon in soils is specific to grazing systems of permanent pasture or those that have been continuously cropped for five years. Advice from the Clean Energy Regulator is that the methodology is unlikely to be cost-effective in relatively low rainfall areas including for much of Australia’s rangelands.

Maps for soil carbon for Cape York are based on few data points, and are of little assistance in providing landholders with guidance for adopting soil carbon as an additional income stream.

The costs of the soil carbon method are likely to be prohibitive since it requires intensive sampling to create a detailed baseline. Several subsequent soil carbon measurements are also required and these will also need to be intensive to meet the 95% confidence levels required. Only qualified technicians must be used, and their work needs to be audited using auditors own expensive methods. Management actions need to be clearly defined and followed. The method itself advises there is no guarantee any of this will provide results.

In 2012 Australian Carbon Rangelands Enterprise (a consortium which included R.M. Williams) submitted a rangelands restoration method for assessment under the CFI.

The method focuses on increasing carbon stocks in woody biomass in rangelands through excluding or reducing stock and managing for feral animals and fire.The method has been assessed by the government and has been sent back to the proponent for further information before being released for public consultation.

Hectare for hectare mangrove forests store the most carbon of all forests on Earth. Using advice from Professor Scott Smithers of JCU, we used Clarkson and Neldner to estimate the potential future extent of mangrove forests under sea level rise. We measured the difference between Mean High Water at neap tides (MHWN) and Highest Astronomical Tides (HAT). The inner part of mangroves was generally considered to be around the MHWN and the hypersaline salt marshes and associated ecosystems were considered an indicator of HAT.

The maps – an example of which is displayed below - show where the sea would likely flow under sea level rise. We used DEM layers to corroborate the model we have used.

Mangroves currently cover an area of 159,517 ha. Saltpan and Mudflat, and Beach Scrub incorporate an area of 240,796 ha and it is this area that might be considered a guide to the potential of future mangrove forests. How much of the current mangroves would be lost as a result of sea level rise is unknown.

There is also no guarantee that the sea will actually rise in these areas or that mangroves will grow there. Our estimates are, however, at a finer scale than recent broader scale maps.

Mapping of Holocene landforms is underway in various locations to see where the sea level was 6000 year ago at a higher sea level than now and these maps can also be used as guidance. Local knowledge could assist the mapping process by providing insight into where the sea has risen to set up monitoring and scientific plots. Using this approach it may be possible to provide an adaptation value based on early action that may ameliorate the impact of sea level rise by pre-emptive mangrove planting. 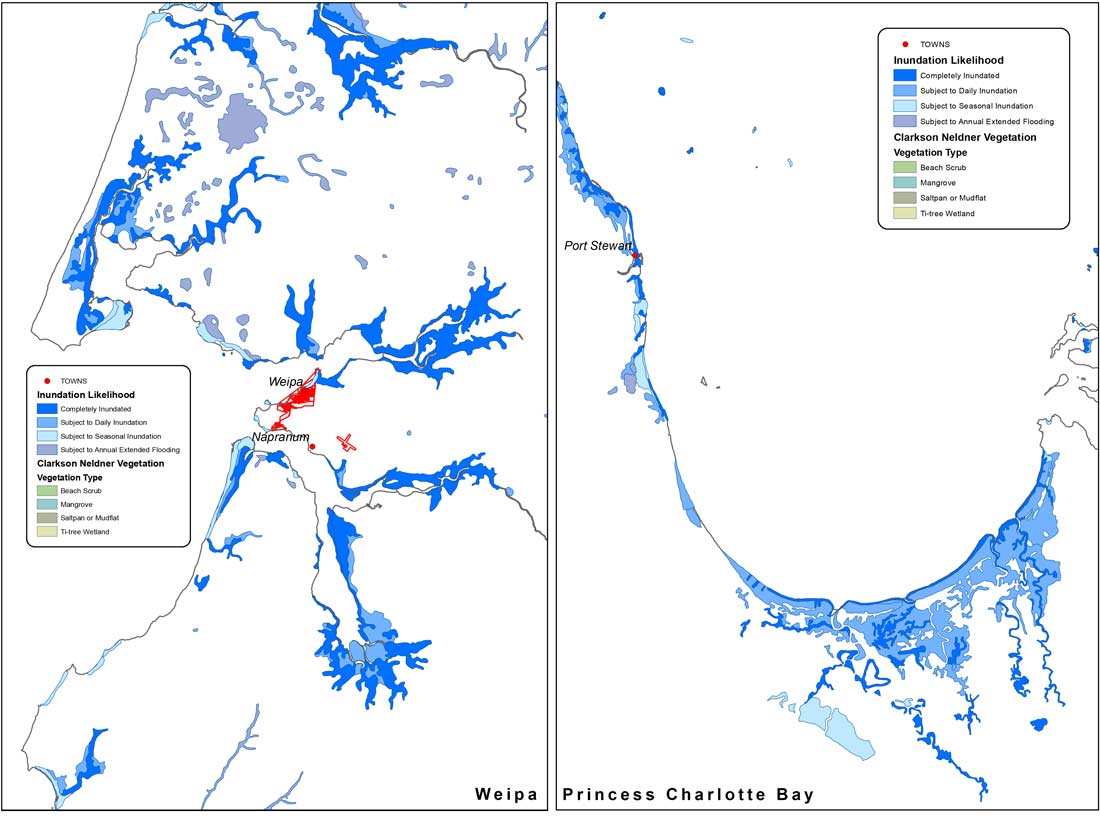