The Western Cape Turtle Threat Abatement Alliance (WCTTAA) represents an agreement between land and sea managers from Pormpuraaw, Napranum, Mapoon, Northern Peninsula Area and Kowanyama to work together for the protection of marine turtles along the west coast of Cape York.

One in a Thousand Documentary

The Western Cape Turtle Threat Abatement Alliance present One in a Thousand: Western Cape York Rangers uniting to save sea turtles. This short film documents the work of Indigenous Rangers in Cape York, working together to ensure turtles can survive and thrive for generations to come. This film is funded by the Australian and Queensland Governments through the Nest to Ocean Turtle Protection Program.

To find out more about the Western Cape Turtle Threat Abatement Alliance contact the Coordinator at wcttaa@capeyorknrm.com.au or phone Cape York NRM on 1300 132 262.

Follow these links to learn more about land and sea manager groups involved in WCTTAA:

The alliance was formally established in May 2013 following 12 months of regional discussions for the future of turtle management on Cape York. Land and Sea Managers recognised that local coordination led to effective outcomes for turtle conservation and would be further enhanced by regional coordination.

WCTTAA’s vision is “to seek to efficiently manage threats to coastal habitats and enhance opportunities for nesting marine turtle populations of the Western Cape”. The mission of WCTTAA states they are “a partnership of on-ground land and sea owners and managers, formed to set priorities, seek solutions and share knowledge to maximise the use of resources for coastal management on Western Cape York.”

They will do this by directing funding into priority areas; undertaking regional coordination of marine turtle work programs; training; data collection and analysis; and recognition and utilisation of local expertise.

Each of the Land and Sea Programs is already stretched to capacity, and a full-time Coordinator was employed in March 2014 with funding support from Cape York NRM and Ghost Nets Australia. This position is hosted through Cape York NRM.

WCTTAA takes a truly bottom-up approach to threat abatement through the coordination of on-ground works, and sharing of resources. Aboriginal Councils and Land Trusts support and direct decision-making of WCTTAA with work implemented by Ranger Groups. Resources are distributed where they are needed, through the agreement of the WCTTAA membership. WCTTAA members have strategic representation on the Turtle and Dugong Taskforce and the group’s direction is in line with Queensland indigenous sea country policy.

Contact the Coordinator at wcttaa@capeyorknrm.com.au or phone Cape York NRM on 1300 132 262.

Sea turtles are beginning to arrive on western Cape York Peninsula beaches to lay their eggs.

Looking After Turtles for Future Generations

Western Cape York turtle nesting season, which runs from July to October, is underway, but 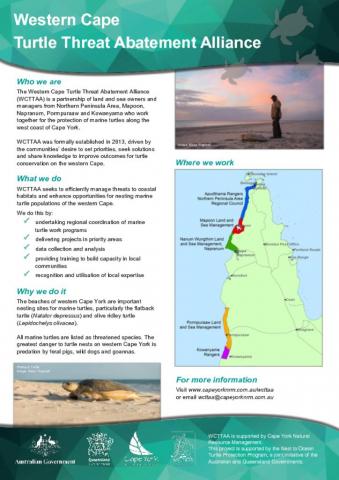