There are many histories of the Cape York Peninsula and these may see the same events from differing perspectives. The history between indigenous and non-indigenous has seen events such as the frist contact between Aboriginal and European cultures at Cape Keer-weer in 1606, the disruption of Aboriginal and Torres Strait Islander society through European competition for resources such as pearl and trochus, followed shortly after by the resettlement of many inidigineous people in missions and settlements and an expansion of the cattle and mining industries throughout the Cape York Peninsula.

The Cape York Peninsula is compromised of 12 urban centres with a combined population of 8,700 people (1994) including Thursday Island, Weipa, Cooktown, Coen, Laura, Lakeland Downs, Wasaga Village, Horn Island, Ayton, Rossbille, Protland Roads, and Prince of Wales Island. As of 1994 there were 10 designated Aboriginal communities which were home to more than one cultural group and all communities were provided considerable financial support from the Commonwealth and Queensland Govermnents. At the time there were also two Torres Strait Islander communities at Prince of Wales Islamd and at Bamaga and Seisia.

As of 1994 pastoral properties accounted for 57.2% of the land mass of the study area and supported a total population of 690 over 124 properties.

During the study period the report found considerable differences between the community profile of the Cape York Peninsula and that of Queensland as a whole. The CYPLUS report found that less than two thirds of people in employment work in skilled or semi-skilled occupations as opposed to 77% for Queensland as a whole with only 80% of children 5 to 14 years of age in the Cape York Peninsula are attending school. The report also found that 71% of the popluation lived in towns of 1,000 people or greater with 7500 people (42% of the population) living in the three largest towns (1994). The report found that the population was urbanised with three distinct racial groups; Aboriginal (31.9%), Torres Strait Islander (20%), and non-indigenous (48.1%) wuth only 5 of the study area's 38 Collection Districts being able to be described as racially mixed. Household size and occupancy levels were high with high levels of overcrowding. Single parent households make up a significant portion of households (20.2% compared to 12.5% for Queensland as a whole).

Aboriginal people prior to colonisation saw the Cape York Peninsula as a mosaic of "countries" or clan estates. The natural resources formed the basis of economy, and Aboriginal cultural practices were individual from the natural environment. There is a type of of religious connection with the land as a web of interrelated sacred sites, many of which may have significant archeological and historical importance. There were, as of 1994, 13 sites of Aboriginal cultural value listed on the Register of the National Estate.

Much Like Aboriginal People the Torres Strait Islander view of heritage includes a focus on kin-based groups as a source of personal identity and a strong attachment to home islands and environements especially the marine estates and fisheries resources.

There are 18 sites or aras of significanct non-indigenous cultural value currently listed on the Register of National Estate.

Community aspirations included that of a balanced, well planned future which incorporates the preservation of their physical and social environment. The main aspirations of Aboriginal and Torres Strait Islander respondents was securing tenure over traditional land, preservation of the natural enviroment and traditional culture, retention of a relaxed lifestyle, improved education, health, and transport services, and a controlled development in tourism. Withstanding the desire to secure tenure over traditonal lands, the main aspirations of the majority of the non-indigenous respondents was much like that of the indigenous respondents.

The CYPLUS report found that there were a number of key policy issues in the Land Use Program and from agency and community consultation pertaining to National and International Obligations, interacial reconciliation, self-determination, land ownership and native title, environment and resource management, infrastructure, service delivery, administration, consultation, and coordination between govermnent agencies. 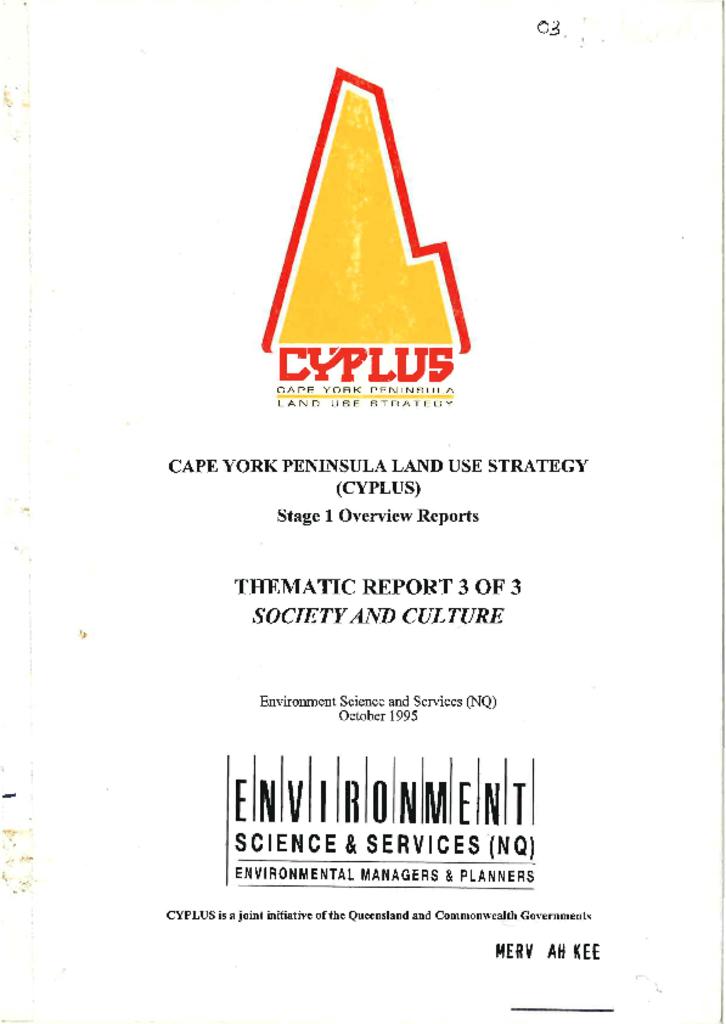