Turtle monitoring wraps up for another year

Turtle monitoring wraps up for another year

Rangers of the Western Cape Turtle Threat Abatement Alliance (WCTTAA) have completed another successful year of turtle nest monitoring and protection on western Cape beaches for 2017. The partnership of five Ranger groups from Northern Peninsula Area, Mapoon, Napranum, Pormpuraaw and Kowanyama work together for the protection of marine turtles along the west coast of Cape York.

With such a large and remote stretch of coastline, each of the WCTTAA Ranger groups has selected beaches (known as census beaches) which are monitored during this peak nesting season. Rangers monitor the same census beaches each year; recording turtle tracks, nests, species, predation rates as well as the success of the nests for hatchlings. In 2017, WCTTAA Rangers monitored 17 beaches, covering 265 kilometres of the western Cape York coast.

A significant part of the Ranger’s work is aerial culling activities to remove feral pigs, which are a key predator of turtle nests. For the endangered Olive Ridley and Hawksbill turtles, Rangers also protect the nests by covering them with an aluminium cage to prevent predators (pigs, dogs and goannas) from digging up the nests. In 2017, only 10% of the turtle nests monitored were predated on census beaches that could be accessed throughout the monitoring season. This is compared to the near 100% predation rate that was recorded on the western Cape in the 1990s.

The numbers of turtle tracks, nests, and incubation success recorded by WCTTAA in 2017 were all stable compared to previous years. However, ongoing protection and monitoring is required as nest predation, the impacts of climate change, marine debris and discarded fishing nets (ghost nets) continue to threaten the future of marine turtles on the western Cape. 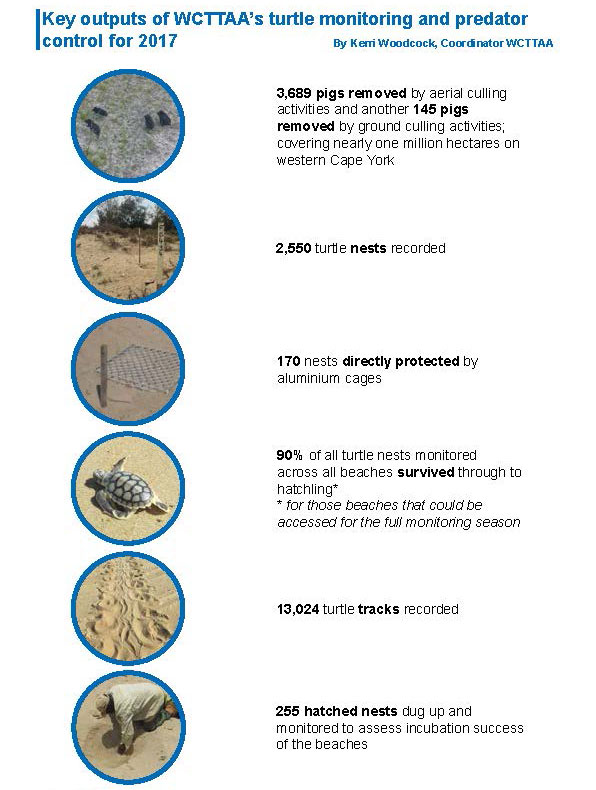