This is the fourth edition of Cape York Natural Resource Mangement's Cape York Healthy Country Newsletter, reflecting on the previous 3 months at the organisation and on the Cape. Throughout that time Cape York Natural Resource Management welcomed Peta-Marie Standley to the team as program manager. The newsletter begins with a full page explanation for the people of Cape York of wild rivers legislation and it's relationship to Indigenous Reference Groups; something the majority of individuals found confusing at the time. The eradication of Salvinia was a focal point in late 2011, being regarded as the worlds worst weed, South Cape York Catchments had then spent over 3 years on Australia's most ambitious and agressive Salvinia eradication program with this article acting as a means of raising awareness about the program, and illegality and environmental risk of harbouring Salvinia on ones property. Two articles on fire are contained in this newsletter; one focusing on hazard mitigation burns on the Cape early in the season to prevent high fuel loads and hotter late season fires, the other carrying a focus on the significance of discussion about fire to change attitudes and allow for the conservational impact of well planned and well managed fire practices on the Cape to spread. The agricultural sector of the Cape York region had then recently experienced a significant blow following the Government's ban on the live exportation of cattle to Indonesia. The pastoralists of Cape York gathered at a live export discussion forum on the 12th of August 2011 in Georgetown to plan for the future of the pastoral industry in the Cape; this newsletter outlined the formation and recomendations of that forum. 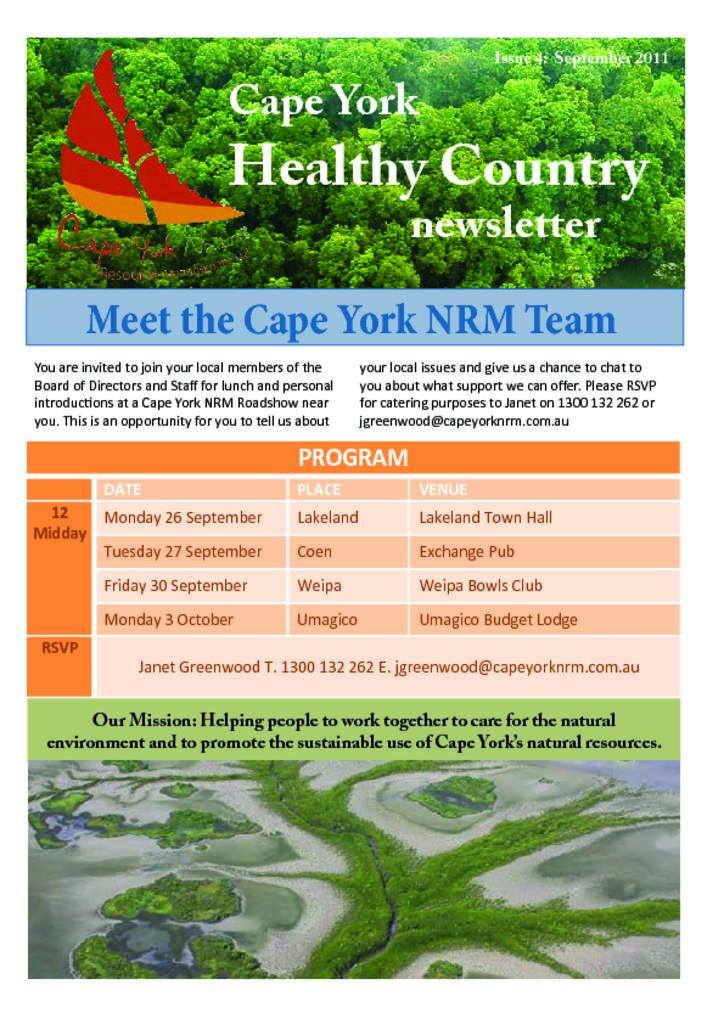