The Cape York Peninsula is a diverse and important region of tropical Australia covering 13,720,000 hectares. The Cape York Peninsula Land Use Strategy (CYPLUS) was established in 1992 as a joint initiative of the Queensland and Commonwealth Governments to provide a vehicle for the establishment of objectives for the use of land and land-related natural resources within the guidelines of the Australian and Queensland Ecologically Sustainable Development (ESD) policy. The CYPLUS process contains 3 stages, with stage 1 consisting of three thematic reports; Natural Resource and Ecology, Land Use and Economy, and Society and Culture.

The majority of the Cape York Peninsula is comprised of roughly 75% level plains with the highest land (800m) occurring in the central-eastern uplands in the Coen/Iron Range area. The area has a monsoonal climate with distinct wet and dry seasons, with less than 60% of the area experiencing greater than 2100mm of rainfall per year. Generally, the northern and eastern areas are wetter than the south and south-west.

There are 16 complete river basins in the Cape York Peninsula of which the Mithcell is the largest in both catchment area and discharge. The rivers draining to the east are generally short and steep while westerly flowing rivers (and the north-flowing Normanby) are large, high volume rivers. The supply of water at the time (1995) was seen to be plentiful, however, flows are highly seasonal. Lagoons and wetlands are more numerous on the west coast while groundwater deposits are abundant in the Carpentaria, Laura, and Karumba basins.

One hundred and thirteen soil types were identified on the Cape York Peninsula with ten major types identified. The most common of these (covering 10% of the study area) includes the deeply-bleached gradational yellow massive soils formed on residual sands from Pormpuraaw through Coen to the east coast. The majority of the soils on the Cape York Peninsula had low levels of plant nutrients and were deficient in nitrogen and phosphorus, with this infertility being identified as a factor which limits the range of plant communities which due to the high rainfall would otherwise be present.

Thirty broad vegetation groups were recorded on the Cape York Peninsula constituting 3,338 species with rare and threatened species making up 11.4% of this statistic. Fourteen species of seagrass were recorded from the Torres Strait and East Coast of the Peninsula while 36 mangrove species were found within the extensive mangrove wetlands along both coasts of the Cape York Peninsula.

The Cape York Peninsula is particularly diverse in fauna, with over 509 species of terrestrial vertebrates being found including one-quarter of Australia's frogs, one-quarter of its reptiles, one-half of its birds, and one-third of its mammals. Aquatic species included 73 species of fish and 15 species which spend part of their life cycle within freshwater environments. Rich and diverse fish and crustacean fauna were found in offshore waters, many of which are of commercial significance.

Three ecological threats were identified by the report including weeds, pest animals, and fire. Over 35 species of introduced weeds were identified throughout most ecosystems on cape york, ten were considered to carry major importance with rubber vine being regarded the most serious. Pond apple was also identified to be of serious concern and threatened to become one of the worst weed species in the future. Pest animals such as feral pigs, dingos and feral dogs, feral horses, and feral cats were identified to cause significant damage to natural ecosystems within the Cape York Peninsula. The feral pig was considered the most serious threat with a population of one to two million being estimated in 1995. Fire is important in maintaining habitat diversity and man-made managed burns have extended the influence of fire and has had an effect on the vegetation of the Cape York Peninsula. The interruption of this well-established fire regime was seen to have the potential to alter the balance of rainforest, woodlands, and grasslands. Unwanted fires from the activities of travellers and tourists were also identified to be a threat to the environment.

The key policy issue identified by this report was the preservation and protection of natural values in terms of biodiversity and ecological processes. These values were seen to require protection within both protected areas (National Parks and reserves under fisheries legislation) and other land. Two solutions were raised for this issue; the expansion of the protected network, and multiple objective management on land. The management of ecological threats was also identified by the report as requiring attention. 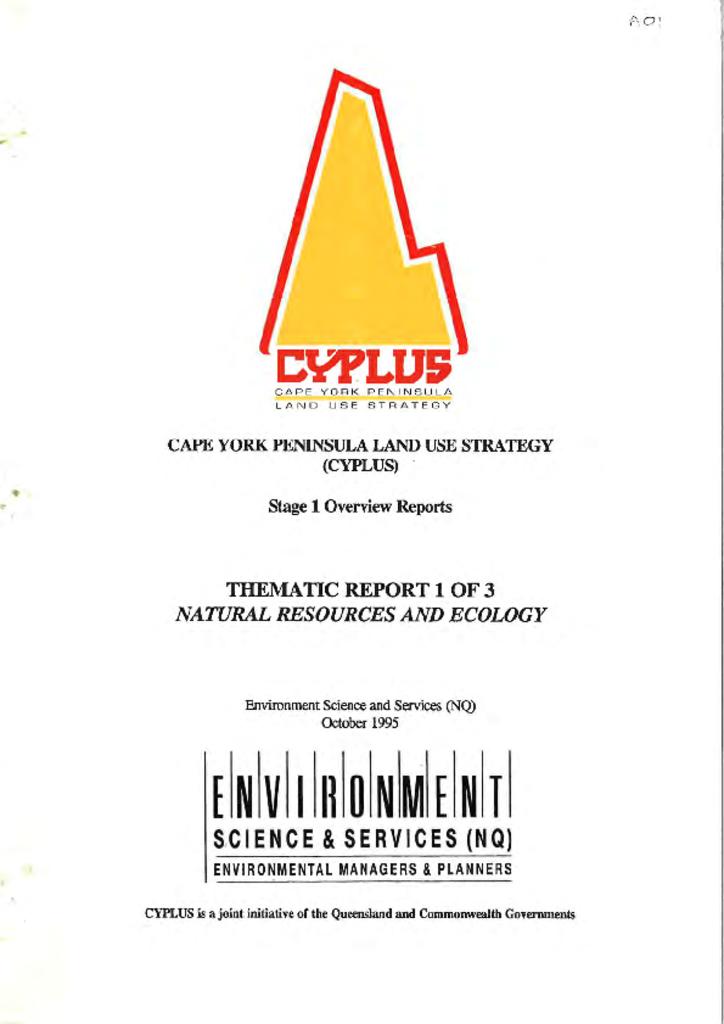