Marine debris consists of discarded or lost unnatural objects that enter coastal and marine environments and persist over time, where they can affect marine life and accumulate on beaches. Debris commonly found in northern Australian marine waters includes plastic bags, bottles, ropes, fishing gear, medical waste, aluminium cans, buoys and thongs. The majority of this debris comes from the land via water runoff or stormwater drains, or has been blown or washed in from coastal areas. The remainder comes from garbage illegally disposed of at sea. Oceanic currents cycling waters from nearby fishing areas make northern Australia particularly vulnerable to the impacts of marine debris. Marine debris is recognised as a Key Threatening Process affecting biodiversity conservation in Australia. In the Northern Territory it is an issue of concern for six threatened marine turtle species and at least three local dolphin species. Nets lost from fishing vessels, known as ghost nets, are a particularly serious problem and are covered in a separate management profile. 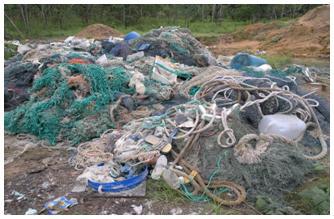