Seagrasses are marine flowering plants that have adapted to growing in muddy, near-shore environments. They form meadows wherever the ocean is shallow enough to allow the sunlight to reach the sea floor. Seagrass meadows are found in river estuaries, along the coast and, if the water is clear enough, way out to sea in waters up to 60 m deep. Recent mapping of the seagrass distribution along the eastern half of the Northern Territory coastline found over 70,000 hectares of intertidal and shallow sub-tidal seagrass beds.

Just like the grasses you may have in your lawn, seagrasses can sprout from spreading underground stems, but they are not true grasses. Of the 60 or so species of seagrass in the world, ten species have been recorded growing in Northern Territory waters.

As long as they remain healthy, seagrass beds filter nutrients and stabilise sediments, helping to keep the water clear. They also support a vast array of marine life. Seagrasses are key habitat for a range of marine species, providing refuges and feeding areas for several species of prawns and fish. Seagrasses are the major food source for the dugong and green turtle. They also support species further up the food chain. The nationally threatened Grey Nurse Shark is one of many species that feed on the schools of fish that live in seagrass meadows. 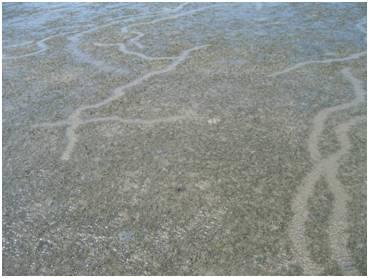