Elsey Station (Northern Territory) is owned by the Mangarrayi Aboriginal Land Trust, and managed by Max Gorringe and his family. The station covers an area of 5,334 square kilometres, of which 2,200 km 2 is fenced. Of the total area, approximately 10% of the station is river country, 15% black soil, 60% red sandy country and 15% made up of ridges. Elsey currently runs 7,000 breeders, with a total of 13,000 head.
Elsey experiences wildfire activity almost every year. These fires prove to be a threat to cattle production through the loss of important feed reserves. The hot late fires through Elsey have potential to damage important habitats, whilst also threatening station infrastructure. 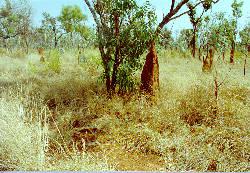